Our former scoutmaster, Derrick Jackson, published a commentary on the BSA National Council’s deliberations over revising their policy on gay leaders and youth. He spoke proudly of the example we set in Troop/Crew 56 starting some 15 years ago in 1998:

MARIA HENLEY of Cambridge was underwhelmed at the news that the Boys Scouts of America may soon let local chapters open membership to gay members and Scout leaders. “I can’t stand up there and applaud,” she said. “I don’t think they deserve all this press for catching up to 2013. All I can say is that it is about time.” 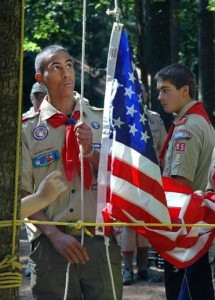 She could say that because she was ahead of her time in 1998, when two women wanted to enroll their son in Cambridge Cub Pack 56. “I said, ‘That’s nice,’ ’’ Henley recalled this week. “One of the women said, ‘But we’re gay.’ I said, ‘That’s nice too.’

“I think they were shocked that I didn’t say anything else. I’m sure they were so used to raising eyebrows, they kept saying things like, ‘Are you sure it won’t be a problem? We’re two moms.’ I finally said, ‘I don’t care if you  prefer doorknobs.’ ”

The moms and their son were welcomed into the pack, in which I also had my youngest son. One of the moms told me in an interview for a column that year that the value of the program overrode the “horrible politics toward people like me.’’

That horrible era may end next week when the BSA national executive board meets in suburban Dallas to decide whether to let local chapters open membership to gays. In 2000, the US Supreme Court ruled in a bitter 5-4 decision that Scout officials had the right to strip James Dale, a gay college-age assistant Scoutmaster in New Jersey, of his BSA membership.

Since then, youth membership has plummeted to 2.7 million, half its numbers of the 1970s. The era of exclusion is ending less because of enlightenment than because of national protests, loss of corporate sponsors, and the BSA no longer having a social leg left to stand on as it becomes one of the last iconic institutions in America not to acknowledge gay rights.

The rebellion began with leaders like Maria, 62, and her husband, Ed Henley, 64, who still live in Cambridge. While Maria ran the Cubs, Ed was, from 1993 to 2003, my predecessor as Scoutmaster. An appliance repair technician for the Cambridge Housing Authority, he echoed his wife’s mixed feelings. Their sons Tim and Joey became Eagle Scouts, but Ed said the BSA’s national policies turned them off from further participation.

“The irony is that Scouting is supposed to let kids teach each other and learn about the world, not be a little closed enclave,” Ed said. “We’re the melting pot of the world. Any kid who wanted to participate, we were excited about that.”

By the time they turned the troop over to my wife, Michelle Holmes, and me in 2004, the acceptance of gay leaders and scouts was a non-issue. Our job was made easier by the Boston Minuteman Council, which had become the most prominent council in the country to write sexual orientation into its non-discrimination policy.

Since the Dale decision, the membership in Pack, Troop, and Venturing Crew 56 has been stable at about 60 youths. But countless families in our neighborhood and nearby schools never considered us because of the BSA’s national policies. Even when same- sex parents joined our Scout groups, they were understandably suspicious of getting involved as volunteers, fearing bigotry at larger Scouting events — no matter how much we said that our council was a safe zone.

So while I am excited that the BSA may drop its gay ban, I share the lament of Maria and Ed, knowing that so many young people — because of politics — were never able to use Scouting to find themselves or discover that mountains, rivers, caves, and community service can go along with video games, sports, standardized tests, and Facebook. The same goes for the untold adults who were dissuaded from volunteering and creating the sense of community everyone says we’ve lost.

“Looking back,” Maria said, “I’d like to believe we created an environment where kids could tell us anything. They knew we didn’t pass judgment. You just give them a chance to figure things out. What has Scouting gained by putting kids on the outside for 20 years?”

The answer, of course, is nothing.